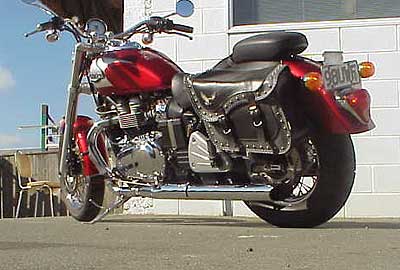 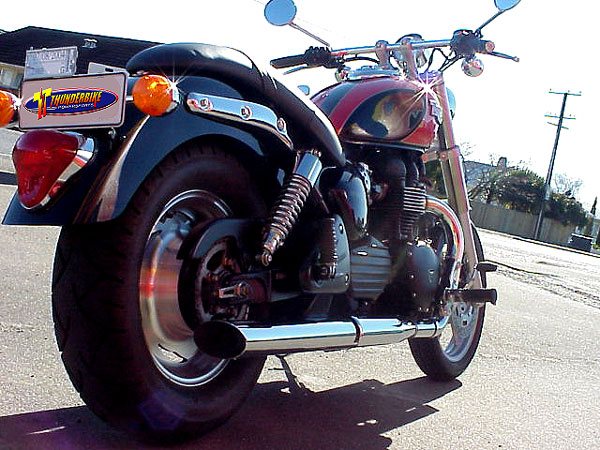 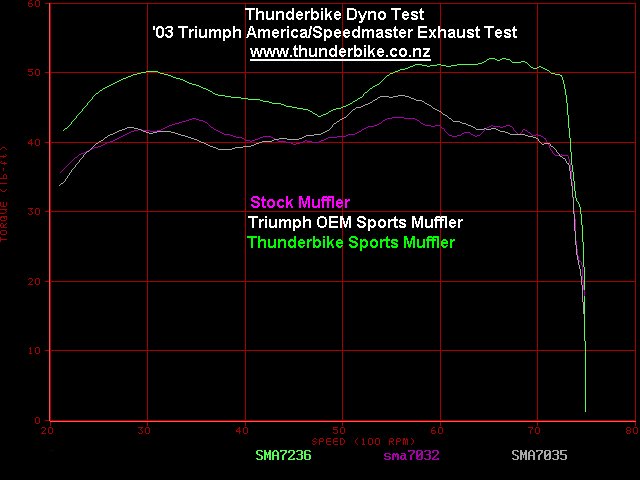 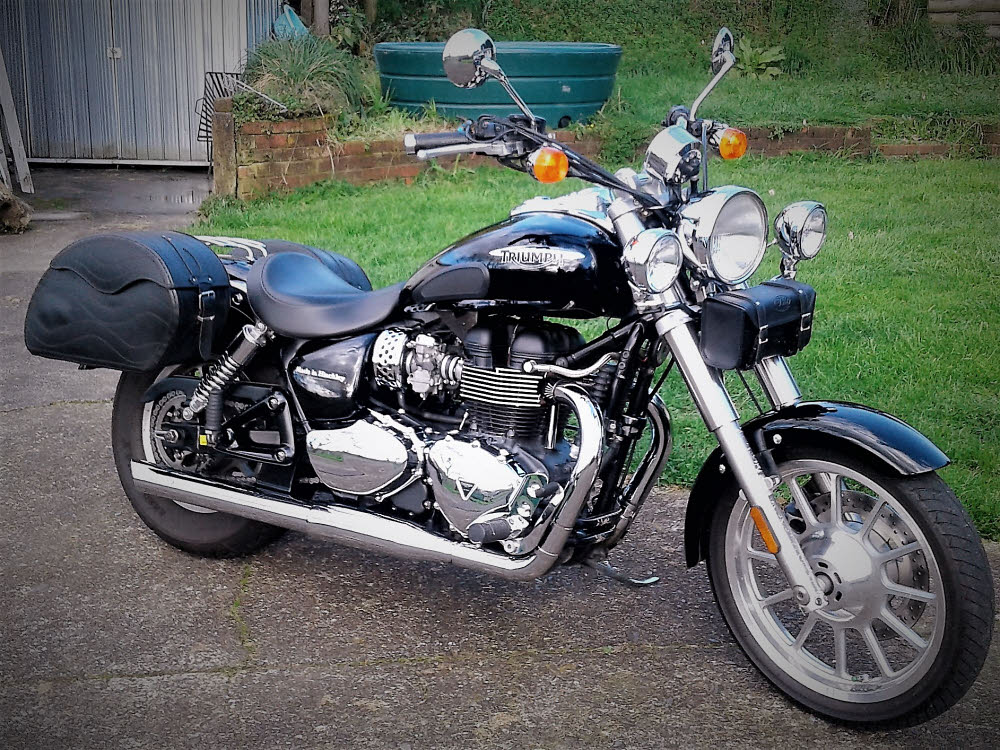 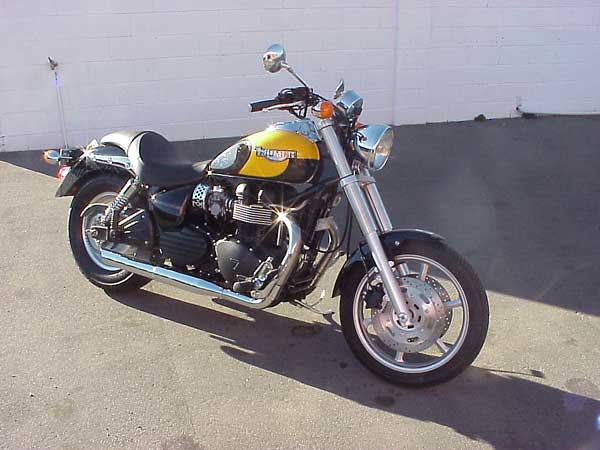 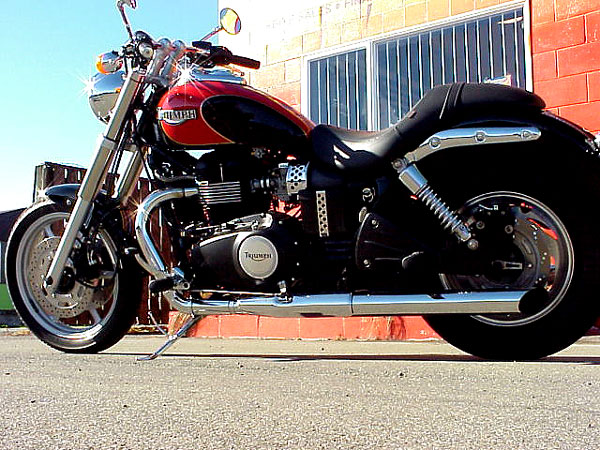 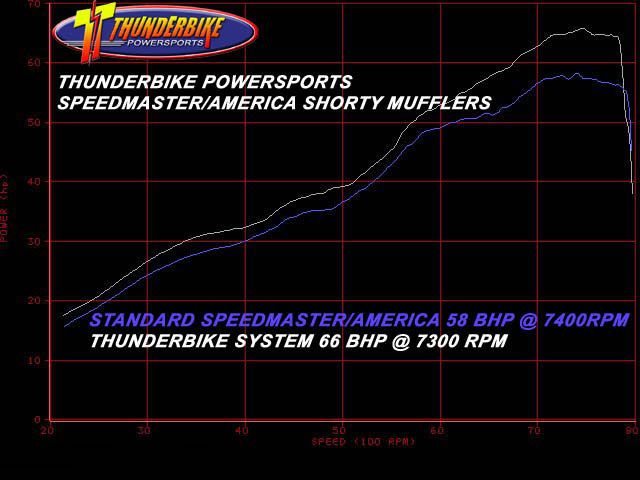 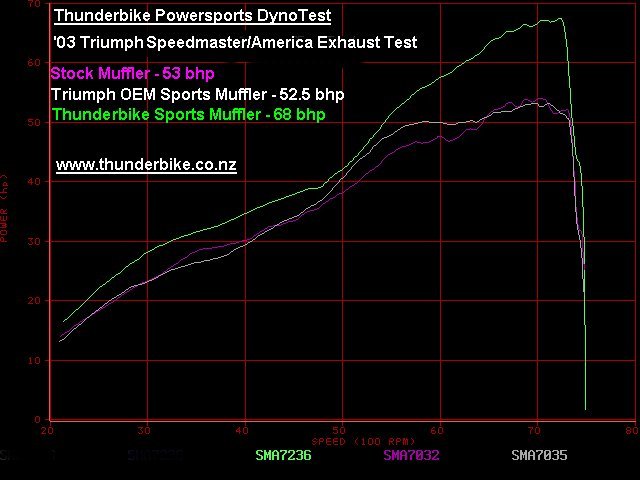 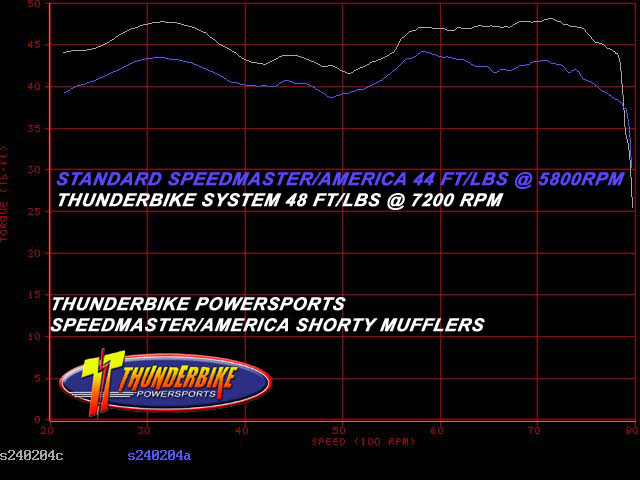 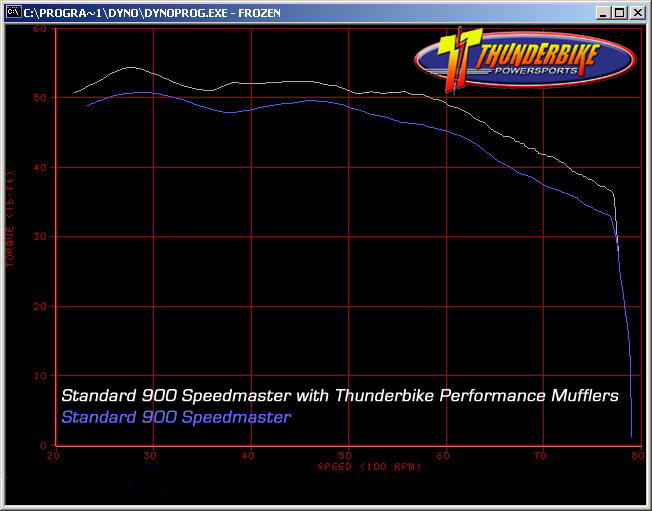 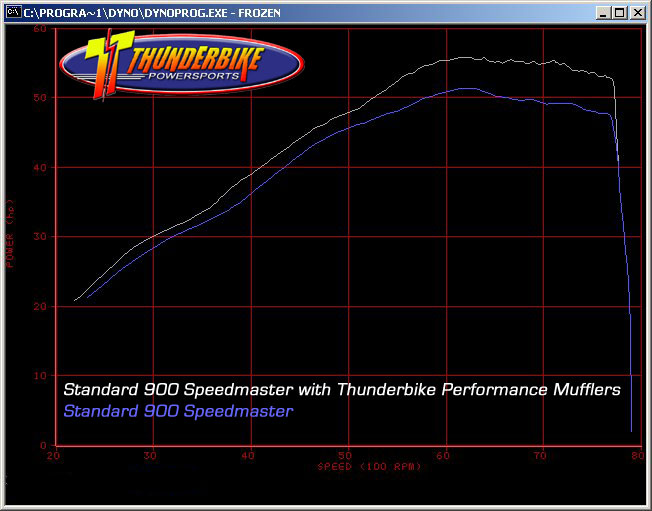 Print this product Email to a friend 3 Reviews

The results on the asthmatic stock 800 engine are excellent. The dyno curves speak for themselves (See 900 info below)
The power is boosted right across the range with up to 15 bhp peak increase around 7000 rpm - that's a 28% power gain. Best of all, the stock jetting works fine with this pipe.

Proudly made in New Zealand.

A great compliment with these mufflers is the Air Injection Eliminator Kit - to help stop the "popping" on the overun and to reduce "blueing" of the exhaust header pipes.

Please note: We offer a 6 month warranty on all chromed products from the date of purchase, the same as genuine Triumph.
While chrome should last longer than that in some environments/condition, there are others (e.g. coastal situations, or areas where salts are applied to the road, or even storage in a moist environment, like a steel container or unlined steel garage) where chrome can fail very quickly indeed. Chrome has a very porous finish and should always be waxed to prolong its life.

Our exhausts are made to order and the lead time to manufacture is 3-4 weeks plus shipping.

Prices below INCLUDE shipping!

Our aftermarket parts for the Triumph Bonneville Speedmaster and Bonneville America cruiser motorcycles will enhance the performance and appearance of your motorbike. Our own high quality Thunderbike made parts for the Triumph Speedmaster and America include luggage racks, handlebars and performance mufflers / exhausts that will add some functional chrome and power to your motorbike. Additionally we offer third party quality motorbike accessories from other manufacturers that we have tested ourself.
Videos
Instructions / Documents
Reviews (3)

Write a review for this product.

My TORâ€™s Triumph Off-Road long-slash pipes had a tone that was much more sharp and barking... like a Thompson SUB machine-gun. The Thunder-bike long-slash pipes have a much lower pitch deep and rich...very much more like a growl as opposed to a bark...but its an intimidating growl... Sounds like a much bigger engine... Its a What the hell do you have in there kind a thing.
Also my TORs actually channeled and amplified all internal engine noise out the back of the pipes. T-Bike pipes very effectively filter out most-all of the sowing-machine noise
created by cams and valves making the engine itself sound quieter and smoother while maintaining a very powerful note.

Just to let you know that I have received the pipes. They arrived yesterday and I put them on last night. It took about an hour to R & R them. They went on without a hitch. Smooth and flawless. Theres lots to say about them but Ill sum it up with Holy Shit ...These pipes are freakin awesome The sound the power the torque This is like a whole new bike Thanks guys ...keep up the great work.

...In conclusion, so far, I can feel a BIG difference in the torque and speed. I mean BIG!!! I can honestly say these pipes, so far, are everything they claim and at this time I give them the official "Dinqua Approval" and a big thumbs up. Ok, two thumbs, they really are stronger! "

All our product prices include shipping fees. To calculate and display the correct prices in the shop, please select where you want to have your items delivered to.

Select your prefered display currency. The shown prices will be converted from the currency of the delivery country (at the moment delivery zone New Zealand / NZ$ is selected). Please note that exchange rates change slightly on a daily basis.